Get Rid of Bats 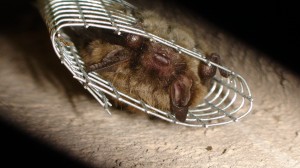 BAT COMING OUT OF ONE WAY DOOR

Most people know that bats have bad eye sight, so when they are flying around in the night they are using other senses to find their way around and to hunt down their food. This “sense” or technique that they use to maneuver around is called Echolocation or also known as Biosonar. While finding their way around and eating hundreds of insects they happened to notice an air draft leaving your home. (Draft is leaving home due to a hole or gap that allows air to escape the attic or living space of the building.) When the bat senses this draft of air from your house it may smell something in there that draws its attention, maybe a previous bat scent that nosed around in there before, or maybe the bat is just curious as to what that draft is going to lead him to. No matter what the reasoning is, the bat still noticed the escaping air from the holes and gaps in your building and from there it can go down hill. That meaning if the bat likes what it found by following that draft into your building, he brings the whole colony back with him and from there you have a colony of bats roosting in your building. Bats are also attracted to the scent of other bats. If a bat smells another colony of bats in an attic it may inspect, and if there is no one there to kick them out, well they just found a new home. It is also possible to have more than one colony living in your building. They will not be living in the same attic but they may live on two opposite sides of the building.

If you are in need of a bat removal in any of the following cities:

Got yourself a bat issue? Take a step toward resolving your bat issue by calling County Animal Control to get a wildlife inspection scheduled!

We do not only service in bat removal. County Animal Control also provides services in removal of raccoons, opossums, skunks and squirrels.